In this edition of Thinking with the Church: a conversation with Dr. Leonardo Franchi. 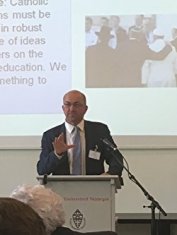 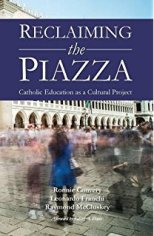 In the Apostolic Constitution, Ex corde ecclesiae, Pope St. John Paul II famously wrote that the Catholic University, “is located in that course of tradition which may be traced back to the very origin of the University as an institution. It has always been recognized as an incomparable centre of creativity and dissemination of knowledge for the good of humanity. By vocation, the Universitas magistrorum et scholarium is dedicated to research, to teaching and to the education of students who freely associate with their teachers in a common love of knowledge. With every other University it shares that gaudium de veritate, so precious to Saint Augustine, which is that joy of searching for, discovering and communicating truth in every field of knowledge. A Catholic University’s privileged task is ‘to unite existentially by intellectual effort two orders of reality that too frequently tend to be placed in opposition as though they were antithetical: the search for truth, and the certainty of already knowing the fount of truth’.”

That project is threatened today by forces found both within and without the Church: the fragmentation of he unity of knowledge – and of knowing as a cultural project, on the one hand; on the other, a strange twofold movement at once toward anti-intellectualism as the default cultural starting point, and toward the elevation of those with applied scientific know-how to positions of high esteem, approaching the level of a sort of priestly caste.

Against this tide, a group of scholar-teachers is quietly and diligently working to ensure that Catholic institutions of higher education will be able to carry out their mission, which is of vital importance to the task of evangelization, especially and in a privileged way by being open to all human experience and ready to dialogue with and learn from every culture.

The advancement of that work is in turn complicated by the increasing pressure on those committed to it to retire to the margins or retreat from the public square entirely.

Hence, the project of Reclaiming the Piazza: an initiative spearheaded by our guest, Leonardo Franchi, a lecturer at the University of Glasgow, on the faculty of education. He is a member of the Creativity, Culture and Faith Research and Teaching group there, and specializes in Religious Education. He is also a member of the Executive of the Scottish Catholic Education Service, and editor – along with Ronnie Convery and Raymond McCloskey – of the volumes Reclaiming the Piazza: Catholic Education as a Cultural Project and Reclaiming the Piazza II: Catholic Education and the New Evangelization, which features a foreword by the President of the Pontifical Council for Promoting the New Evangelization, Archbishop Rino Fisichella, and contributions from Tracey Rowland, Francis Campbell, Bishop John Keenan, Isabelle Boyd, Fr. Joseph Lappin, and Natalie Finnigan, in addition to the essays of the editors, which provide a framework for the project and give careful articulation to the basic problems of education as they are encountered in the current cultural context.

Our broad-ranging conversation began with the question: from whom do we need to reclaim the piazza – the public square, and what are the fundamental “do’s and don’ts” of that work of recovery and reappropriation?