Hello friends, and welcome to Thinking with the Church. I’m your host, Chris Altieri.

We were late getting this latest edition to you – we hit some technical snags – and then the events of the week forced a radical re-thinking of the structure and scope of the episode.

As most of you will know by now, a suicide bomber attacked concert-goers at Manchester Arena on Monday night killing twenty-two people and wounding fifty-nine others, twenty of whom are at risk of life or limb.

The attacker targeted children, and succeeded in killing and injuring many of his intended victims.

Pope Francis was among the world leaders who condemned the attack, calling it, “[B]arbaric,” and, “[a] senseless act of violence.”

While I certainly join the Holy Father in condemning the attack, the terms in which he condemns it call for close, careful analysis.

That the attack was barbaric is not true without qualification, for the wholesale slaughter of children is not incompatible with civilization – not even with our own.

Pharaoh ordered the slaughter of every man-child born of a Hebrew woman, and Herod ordered the same at the time of Our Lord’s birth.

Nor was this bloodlust an Oriental caprice.

Caesar, at Avaricum, ordered the city stormed and the population slaughtered “without respect to age or sex.”

It was only under the influence of Christianity that such behavior as a matter of policy came to enjoy general disapproval, and that general disapproval has far too often been honored in the breach, and too rarely have rulers of nominally Christian nations eschewed it with due rigor when dealing with enemies.

From Agincourt, where boys were cut down behind the lines and prisoners were shot with arrows, put to the sword, or burned alive – the accounts vary – to Magdeburg in the Thirty Years’ War, to the German rape of Belgium in 1914, to Rumbula, to the burned-out rice villages of Vietnam, to the hovels of Afghanistan and the tenements of Sadr City, armies and those who command them have either ordered or winked at the murder of children with appalling regularity.

Nevertheless, we do condemn such slaughter as evil, and that is something.

In an important sense, the attack was also “senseless”: evil is always lacking in due rationality, and ultimately futile – Christ Our Lord has won deathless victory over sin, and reigns even now from Heaven.

In this sense, however, all evil is “senseless”.

Whatever else the attack in Manchester was, it was not “senseless” in its scope.

The attack targeted children and young people: the attacker executed his assault at a moment chosen in view of its aptness for destruction and mayhem; he carried out the attack in the name of a creed – a version of a creed – irreducibly inimical to ordered liberty as the members of the society, whose children he chose to destroy, broadly understand it; he attacked a little more than a fortnight ahead of a major general election.

The sense of such an atrocity could not be plainer, were it written on a wall in blazing letters.

Whether they shall prove to read, “Mene Mene Tekel Upharsin” depends entirely on the quality of the response we give.

To desire peace with all men is a basic and imprescindible tenet of our creed.

That we should behave in a manner consistent with that desire at all times, even when circumstances require us to respond most forcefully to aggression and even to go out to punish evil done against us, is thereof a necessary and exceptionless practical corollary.

Remember that indignation undisciplined becomes blind rage, and mis-becomes the wielder of the sword of vengeance.

Peace with all men: what is peace?

When authors writing in English employ the word, “peace” they are more or less consciously wording a concept represented by Christian political and theological authors with the Latin, pax.

Arabic is the language of Islam.

The Arabic word most often translated to English as “peace” is salaam, which is, like pax, a technical, juridical term.

In the Christian tradition, pax (peace) is the presence of “justice”.

“Justice”, in its turn, is “the condition of concord in society” achieved through the “rule of law”.

“Law” is a “dictate of reason promulgated by competent authority and ordered to the common good”.

“Reason” is a peculiarly human faculty, by the proper exercise of which human nature may attain to an understanding of Divine ordinance.

Salaam, on the other hand – and as far as I understand it – refers to the state of absolute submission to the manifest will of the one God. Now, “submission” in this case renders the Arabic word (another juridical term) islam, from which the Muslim religion has its proper name.

The Arabic for “one God” is Allah, who makes his manifest will known through the Qur’an (which literally means, “recitation”, meaning the recitation the being claiming to be the archangel Gabriel ordered Mohammad to make), and is therefore the name of the Muslims’ holy book, often transliterated as Koran (and misleadingly, though not erroneously rendered as “revelation”).

Qur’an is the source and ultimate authority in and for law under Islam – for it is the “revelation” given to Mohammad, whom Muslims revere as the “Seal of the Prophets”.

Peace, according to the Muslim religion, is the absolute rule of Islam, or absolute submission to the will of Allah, as made manifest through His revelation, which is Law.

It would seem to follow, that there is no salaam where there is no islam, no “peace” outside the “complete subjection of each and every living person’s will, to the will of Allah as made manifest in the Qur’an”.

It is essentially theocratic and exclusivist.

There is, in other words, no distinction between the temporal and the spiritual – no ‘separation of Church and state’, as it were – by which I mean to say not that there are no separate institutions in Muslim majority nations, but that the distinction is lacking in theory or in principle.

God’s revelation through Mohammad, “The Seal of the Prophets” has been given to the whole world: Islam has been proclaimed and exists de iure over the whole planet; the task of Muslims is to bring every living person into the ummah, the “community of believers” in which the rule of Islam is realized in fact.

We are used in the West to talk unproblematically about “moderate” Muslims and “moderate” Islam.

Commentators like Victor Davis Hanson and Thomas Friedman have both written to the effect that the Islamic world needs its own “Enlightenment” – as though it were a simple matter of fathoming notions of equality, democracy and free inquiry (without realizing that the Enlightenment forms of these were really perversions of the classical notions, and directly tending toward the present Western ills of radical secularism, legal positivism, technocracy, but let us grant for the sake of argument that an Islamic “Enlightenment” would be a good thing) – and unthinkable that the intellectual and spiritual elements of such a cultural revolution might be lacking.

In the Christian tradition, peace (pax) is the presence of justice, which is the condition of social concord through rule of law, and law is the perfection of reason (ratio), by which human nature participates in the Divine order.

There seems, therefore, to be little to justify translating both the Christian pax and the Islamic salaam with the English “peace”.

“Law”, after all, is for Christians the participation of human reason in the Divine order, while for Muslims, “Law” is ultimately the manifestation of Divine will, a will that one cannot hope to understand and to which one must only submit.

The question whether Islam is a religion of peace arises, then, from a misconception created by the inappropriate use of a single word in English to translate two different words from two different languages, words that function as technical juridical terms in distinct and conflicting cultural systems.

Where does this leave us?

That is another question.

One thing, however, is clear: as far as Islam is concerned, there can be no “peace” until everyone living has submitted to the dictates of the Muslim religion.

Once the Law has been proclaimed, to refrain from an act of submission is, quite literally, to place oneself outside the law, i.e. to be an outlaw.

This is why joint condemnations of the deliberate killing of innocents are of such dubious worth.

No one with any use of reason countenances the killing of innocents as a matter of policy: but, who is innocent?

If professing a creed and belonging to a group were all there is to it, then there would be nothing for it but to recognize irreconcilable enmity between Muslims and, well, everyone else.

Even if Islam and Christianity are irreducibly opposed – and indeed they are – anyone committed to the idea that mankind are one family, and human nature essentially rational, must reject the idea that any person, or group of people, should be irretrievably cut off from amity.

Here Benedict XVI is our teacher.

I remember receiving advance copy of his remarks in the early morning on the day he delivered his now-famous Regensburg discourse – and I remember first calling the home office to let them know the HF would be making news – and then calling my folks to tell them to get to confession and Mass.

But, what did he do in that speech?

Most pertinent to our present purposes, Benedict told a story of an Emperor who, during the decade-long siege of his capital city, snuck out of his besieged capital to engage in dialogue with one of the enemy’s learned men.

During the course of the dialogues, the Emperor entertained very blunt language regarding the enemy’s religion.

The Emperor’s host did not react violently, but allowed himself to become the Emperor’s interlocutor.

Benedict, in other words, told a tale of learned warrior-leaders who freely sought dialogue in the midst of the most difficult conditions.

“If they could do it,” Benedict suggested, “then surely we can.”

There is, however, one final condition of possibility, which must be met:  we must recognize each other as moral agents.

We must resist the temptation to reduce terrorists to pawns: whether by treating them as brainwashed fanatics or as otherwise helpless victims of social, political, and cultural conditions.

However necessary and proper considerations of what we sometimes call “structures of sin” are in our efforts to understand the “causes” of terrorism, the pretense that terrorists are somehow other than moral agents who choose evil is offensive to their dignity.

We can – we must – respect the good faith of our interlocutors, and the sincerity of their convictions – and we must demand reciprocity in these regards – even as we meet them without stint in reasonable discourse. 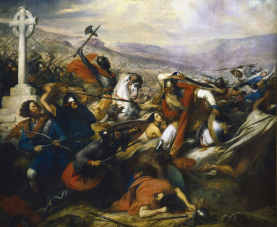 Charles de Steuben’s Battaille de Poitiers and a piece of Giotto’s scenes from the life of St. Francis

Friends, the podcasting arm of Vocaris Media is listener-supported, so, your donations really are what make this possible. $1 / show is what we ask – though we’re always happy to receive more.

You can donate by going to thinkingwiththechurch.wordpress.com and clicking on the “support TwtC” tab in the menu at the top, or by going to vocarismedia.com and looking for the “donate” button in the top-right corner of the page.

You can participate in discussions by going to the blog: again, that’s at thinkingwiththechurch.wordpress.com and leaving your thoughts in the comboxes.

Like the Vocaris Media page on Facebook to stay abreast of all the doings at Thinking with the Church and in our other initiatives: facebook.com/VocarisMedia/

“Thanks!” as always to Executive Producer Ester Rita.

Sean Beeson composed our theme. Hear more of his musical stylings at www.seanbeeson.com.