This is Vocaris Media and you are listening to Thinking with the Church. This week, we spend more time with Prof. Nicolas Steeves SJ, of the Pontifical Gregorian University. Prof. Steeves is a Jesuit priest who teaches Fundamental Theology at the “Greg” – as it is affectionately known by its alumni.

You can hear Part One of our conversation in Episode 4 of the podcast, which you’ll find, along with show notes, at www.thinkingwiththechurch.wordpress.com.

There, we talk about the role of imagination in theology – and we pull on several threads that we do not really tie up. So, in this episode, you can hear us tying those bows. Before we tie them, though, we delve more deeply into the questions we left open, including: Ignatian spirituality; how Martin Luther King’s “I Have a Dream” speech works on the imagination, and what Fundamental Theology is.

We begin with St. Ignatius. 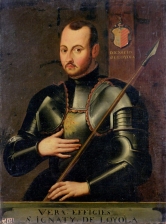 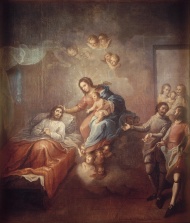 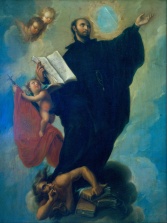 Speaking with Prof. Steeves, I am reminded of some lines from somewhere in C.S. Lewis’s Mere Christianity:

Already the new men are dotted here and there all over the earth. Some, as I have admitted, are still hardly recognisable: but others can be recognised. Every now and then one meets them. Their very voices and faces are different from ours: stronger, quieter, happier, more radiant. They begin where most of us leave off. They are, I say, recognisable; but you must know what to look for. They will not be very like the idea of ‘religious people’ which you have formed from your general reading. They do not draw attention to themselves. You tend to think that you are being kind to them when they are really being kind to you. They love you more than other men do, but they need you less. (We must get over wanting to be NEEDED: in some goodish people, specially women, that is the hardest of all temptations to resist.) They will usually seem to have a lot of time: you will wonder where it comes from. When you have recognised one of them, you will recognise the next one much more easily. And I strongly suspect (but how should I know?) that they recognise one another immediately and infallibly, across every barrier of colour, sex, class, age, and even of creeds. In that way, to become holy is rather like joining a secret society. To put it at the very lowest, it must be great fun. – C.S. Lewis, Mere Christianity

Though, also with Lewis, I don’t pretend to know, I think I have found one of these in Prof. Steeves.

Anyway, that’s our story and we’re sticking to it.

Remember: producing Thinking with the Church is itself great fun – but it isn’t free, or even cheap, and the podcasting arm of Vocaris Media is listener-supported, so, your donations really are what makes this possible. $1 / show is what we ask – though we’re always happy to receive more.

You can make your donation by going to www.vocarismedia.com and looking for the “donate” button in the top-right corner of the page.

You can participate in discussions by going to the blog: again, that’s at www.thinkingwiththechurch.wordpress.com and leaving your thoughts in the comboxes.

Thanks as always to Executive Producer Ester Rita. Our web guru is Christopher Bauer Anderson – “Topher” Anderson of www.lifesiteministries.org. Sean Beeson composed our theme. Hear more of his musical stylings at www.seanbeeson.com.